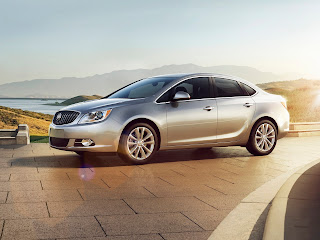 This past week at the North American International Auto Show in Detroit, Buick took the covers off of the all-new 2012 Buick Verano.  The Buick Verano for sale in Columbia SC features a standard 2.4L four-cylinder engine rated at 177 horsepower, about 45 more than the Chevrolet Cruze that rides on the same revised Delta platform.  In the future, the 2.0L turbocharged engine from the Buick Regal Turbo will be offered.  If visions of over 200 horsepower in a small compact sedan strike your fancy, look no further than the new Buick Verano!

Verano will offer Buick's exclusive QuietTuning technologies, which Columbia drivers love for its ability to reduce, deflect, and absorb all manner of road noises to provide a world-class ride.  Even in a compact sedan rated for 31 highway miles per gallon, the Verano will offer a library-quiet ride.  Pricing has not been announced as of yet, but the Verano will arrive in Columbia, SC in the fourth quarter of 2011. More photos  can be had at our special microsite, http://www.BuickVeranoColumbiaSC.com/.
Posted by Jim Hudson Buick/GMC/Cadillac/Saab at 3:19 PM

Find Us Around the Net!